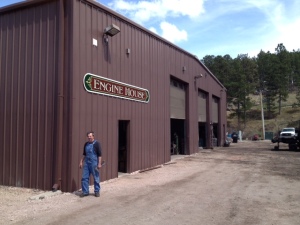 Outside of the Engine House at the 1880 Train.

If you’re like me, when you turn on your computer or start your car, you just want it to work! You aren’t in tune with all that goes behind actually making it work. The same can be said for riding a train, I imagine. In this day and age, you may think that someone simply turns on a switch and takes you from point A to point B. Nothing can be farther from the truth.

I found this out by attending the 1880 Train’s new Engine House Tour (EHT) that began Memorial Weekend. The EHT was the brainchild of Black Hills Central Railroad President Meg Warder who wanted to devise a way that the public could get a behind-the-scenes tour of what goes into maintaining and operating the 1880 Train year round.

Just so happens that it’s not as easy as turning on a switch. 1880 Train employee Owen Weiderhold  led the tour that I took last week. Some of the facts he relayed to me are:

I don’t want to spoil it entirely for you, so I listed only a few things I learned. For an extra $5, I would suggest adding this to your 1880 Train experience. You can take a tour at either 11:45 am or 3 pm each day until Labor Day. They last 30 minutes. After Labor Day, tours will be given once a day at 11:45 am until October 13. Call 605-574-2222 to reserve a spot or see a ticket agent at either the Hill City or Keystone stations.

Written by Debbie Ketel, the new 1880 Train blogger. By night, on weekends and between kids’ events, I convey the vision of the 1880 Train to YOU. (I’m also learning about trains.) Join the blog and take part in my journey!

1 Response to Who Knew?