Remember to “Name That Train”

The 1880 Train/Black Hills Central Railroad (BHC) recently purchased rail car #403, a Jewett-built interurban passenger car, to add to the fleet. It is a fully enclosed car. The BHC is encouraging the public to help find the perfect name for it by entering the “Name That Train” Contest by May 9. More information and contest rules may be found at www.1880train.com. Participation is free. 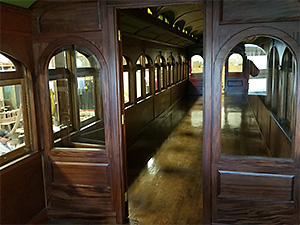 The new car was originally built by the Jewett car company for Bamberger Railroad in Utah in 1910. In 2012, the BHC purchased it from Heber Valley Railroad and sent it to Gomaco Trolley Company in Ida Grove, Iowa, to be reconditioned.

Number 403 arrived in Hill City in late January, 2016, without seats in the car to make the load as light as possible in transit from Iowa to the Black Hills.  The BHC Engine House crew constructed the metal bases and wooden arms for each of the seats. The seat cushions were upholstered in Rapid City and assembled back at the Engine House. The seats are now installed and the car can accommodate 60 passengers.

See the car on its arrival to the Black Hills Central Railroad!

Restoring rolling stock continues to be integral to the BHC mission. Some of the other cars the railroad has restored and maintain include: Edward Gillette, Keystone, Oreville, Rochford, Hilyo, Redfern, Mystic, Harney Canyon and Blue Bird.  For more on BHC rolling stock, go to our website for a list.