Spotlight of the Week: Coach #65 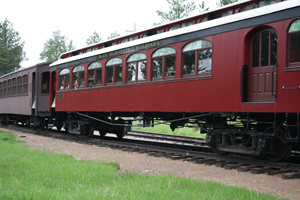 The Black Hills Central Railroad’s Coach #65 is also known as the “Edward Gillette.” It was named after an engineer who was the track locator for the High Line Route from Edgemont to Deadwood and was originally a combine car used on the Oregon Electric Railway. Car #65 has been at the 1880 Train since it was purchased in the 1970s, and restoration to its original glory began in the winter of 2008. The car was completed in time for use on the 2009 Holiday Express.

Edward Gillette accommodates 48 passengers with style. The car features several hard woods throughout its interior along with stained and frosted glass windows and upholstered seats.

Learn more about all of our train cars in the 1880 Train Guide Book! It’s available online and at our gift shops in Hill City and Keystone.